One Sentence Summary:  The Phillies couldn't regain an early lead, falling to the Marlins, 6-4.

What It Means:  The Braves keep losing too, prolonging this agonizing September.

What Happened:  Cesar Hernandez homered (13) off the first pitch he saw from the Marlins' Jose Urena.  Luis Garcia gave up three Marlins runs in the 6th to seal the win.  The Phillies made it interesting, scoring twice in the 9th but Rhys Hoskins struck out with a runner on second to end the game.

Roman Quinn drove in a pair of runs.  Aaron Altherr didn't enter the game until the 7th but still had two hits.

Featured Card:  This piece of information as Tweeted by Doug Kern caught my eye, pertaining to Saturday's game against the Marlins.  With his home run in the 2nd inning on Saturday, Justin Bour became the first Phillies player to hit a pinch-hit home run in the 2nd inning since Keith Miller did it against the Pirates on June 10, 1988.  Miller was pinch-hitting for Danny Clay who had relieved Shane Rawley after Rawley surrendered five runs while recording one out in the first.

Field Report:  I had to fly out of Philadelphia for a brief work trip, and I took this picture from the plane just as the game was ending.  From this height, you can't tell the Phillies are having an awful September. 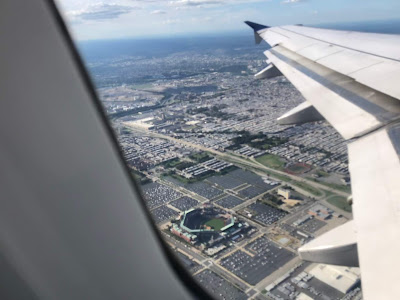 From June 30 to July 10, 1979, Del Unser batted three times, all as a pinch-hitter, and all three resulted in home runs.

So it seems shocking that the Phils went 30 years between pinch-hit HRs.

I just looked it up, and I think you may have misinterpreted the tweet. That was the was the Phillies' first _second-inning pinch-hit_ since 1988; given that pinch-hitting in the second inning is unusual, that makes more sense.

Fixed it! That's the key part of the whole sentence.