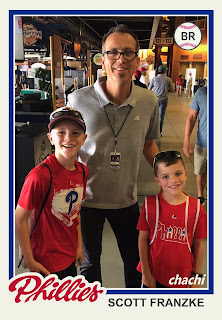 One Sentence Summary:  Aaron Nola struck out 11 but allowed three solo home runs and the offense went 1 for 7 with runners in scoring position on the way to this 8-1 loss to the Cubs.

What It Means:  The Phillies offense scored four runs in the three-game weekend series with the Cubs.  The team absolutely needs to start hitting against the Marlins and Mets this week if there's any hope of a postseason.

What Happened:  Nola departed after 5 2/3 innings with the Cubs ahead 4-0.  Luis Garcia allowed four more Cubs runs in the 8th, putting the game completely out of reach.

Roman Quinn started the game by getting thrown out at third trying to stretch a double into a triple.  That was pretty much the only excitement generated by the Phillies offense all day and it was over in less than 10 seconds.

Transaction:  Justin Bour was activated from the disabled list, giving the Phillies 32 players on their active roster.

Featured Card/Field Report:  For the second time this Labor Day weekend, the four of us made the trip to Citizens Bank Park.  The weather was much different than Friday night, as it was sunny, hot and humid.  Fortunately, we were able to find some shade sitting with Jenna's Mom and brother who were also attending the game.  The boys added Phillies backpack/cooler bags to their ever growing collection of Phillies-related backpacks/bags.

About an hour before first pitch, we met radio broadcaster Scott Franzke on the concourse and he was kind enough to pose for a picture.  It was all downhill from there.  Standing in his usual spot at the end of the Phillies dugout, Doug managed to get an autograph from pitching coach Rick Kranitz before needing to retreat from the sun.

I took a few pictures of new Phillie Jose Bautista on the field as a professional photographer asked him to pose in several classic baseball card poses.  Bautista obliged the photographer with bat on the shoulder, full swing, half swing and kneeling with bat poses.  It will be interesting to see if any of these shots show up in either Topps Update or Topps Heritage High Numbers (my guess). 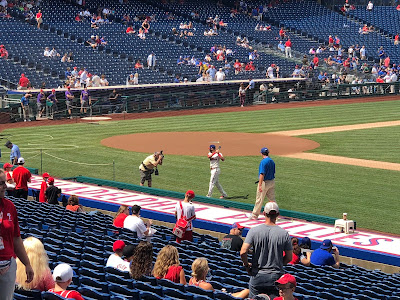 I have to admit I didn't know who Scott Franzke is, but it's cool that you got to see Bautista posing for a photographer. I suppose it could be for 2019 Heritage... I hear that they're going to rip off 2016 Chachi!

I ran into Franzke as well with my son during a game this year. It was during one of the middle innings when Jim Jackson takes over. He was very nice and chatted for a moment with us.