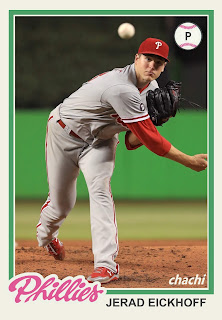 Jerad Eickhoff (RHP - AAA) - Eickhoff has been in the Rangers organization since 2011 and he's appeared in 18 games this season (17 starts) for the AAA Round Rock Express.  It doesn't appear as if Eickhoff has any mainstream baseball cards to date, although he has appeared in a number of Rangers minor league team sets.