At the Ballpark:  This is annually one of the best weekends all season at the ballpark as the Phillies go above and beyond to celebrate their past and bring back as many alumni as possible.  On Friday, Shane Victorino will officially retire in a pre-game ceremony and he'll throw out the first pitch.  Fans will receive a Shane Victorino Big Head Collectible.

On Saturday, Roy Halladay and Pat Gillick will be inducted into the Phillies Wall of Fame in a pre-game ceremony and all fans will receive a commemorative print.  There will also be a pre-game wiffle ball tournament featuring members of the 2008 Phillies.

Sunday is the annual Alumni Day and the 2008 Phillies team will be honored in a pre-game ceremony.  All fans will also receive a Brad Lidge bobblehead and the list of returning Phillies alumni is impressive. 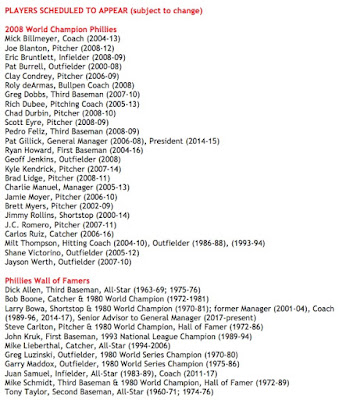 Any idea who the uniformed coach in the front row between Thompson and de Armas in the 10th anniversary team photo is? He looks like the only addition to the list you posted.

That's Jerry Martin. He was the interim first base coach while Davey Lopes missed time for cancer treatment.

Ah, thanks. I should have known--he had no beer spillage on his pants or jersey. :->