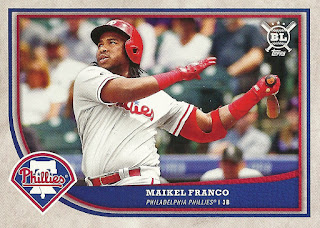 One Sentence Summary:  Maikel Franco slugged a dramatic, 3-run, walk-off home run against the Marlins to give the Phillies a 5-2 win and maintain the team's position in first place.

What It Means:  Rhys Hoskins called Franco's bomb, "The biggest hit of the season."

What Happened:  The Phillies were down 2-1 going to the bottom of the 9th.  Marlins closer Kyle Barraclough walked Hoskins to start the inning.  Carlos Santana beat out an infield hit and Asdrubal Cabrera walked to load the bases.  With Scott Kingery running for Hoskins, Nick Williams grounded out to third and Kingery scored to tie the game.  Franco then hit his home run and performed an epic bat flip, losing his helmet in the process.  What a game!

Hoskins hit his 22nd home run in the 6th and Nick Pivetta had an effective outing, allowing 2 runs on 4 hits while striking out 7.

Featured Card:  I couldn't be happier for Franco, who seemed to be heading out of town earlier this season.  He's now an important part of the line-up (again) and he's playing a fine defensive third base to boot.

Transactions:  Aaron Loup was officially added to the roster and Adam Morgan returned from paternity leave.  Jake Thompson and Yacksel Rios were sent back down to Lehigh Valley to make room in the bullpen.  Also, Edubray Ramos was activated from the disabled list and sent to the IronPigs as well.
Posted by Jim at 9:00 PM