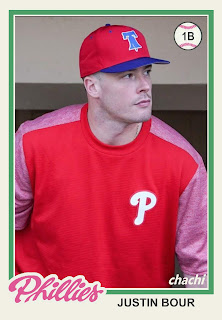 First Mention on The Phillies Room:  September 14, 2014 - Kyle Kendrick held the Marlins to a run on seven hits in 6 1/3 innings of work, while striking out six.  In what has now become standard operating procedure, Jake Diekman, Ken Giles and Jonathan Papelbon closed out the seventh, eighth and ninth to seal the victory.  (Wouldn't it be awesome to see that trio in action for a contending team?)

Maikel Franco and Marlon Byrd drove in the only two Phillies runs in the first.  Byrd also threw out Justin Bour at home in the top of the seventh to preserve the slim Phillies lead.