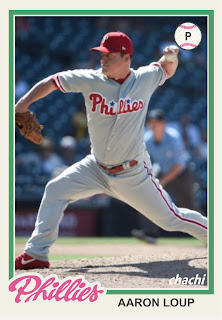 First Mention on The Phillies Room:  August 1, 2018 - On Tuesday afternoon, in a flurry of activity leading up to the 4pm non-waiver trade deadline, the Phillies acquired All-Star catcher Wilson Ramos from the Rays and lefty reliever Aaron Loup from the Blue Jays.  The moves capped an impressive week of transactions for the club, as they added two veteran bats (Ramos and Asdrubal Cabrera) and a veteran bullpen arm without subtracting anyone from their Major League roster or dealing any top prospects . . .

I’m genuinely concerned with my dwindling knowledge of current baseball players given that Loup has appeared in 369 games for the Blue Jays since 2012 and yet I’ve never heard of him.  A true left-handed specialist, Loup amassed 318 2/3 inning pitched in those 369 career appearances.  So far this season, he has a 4.54 ERA over 50 games.  He’s also a free agent following this season, and the Phillies gave up Triple-A pitcher Jacob Waguespack for him.  Loup has a card in the 2015 Topps set as well as the 2018 Topps Blue Jays retail team set.