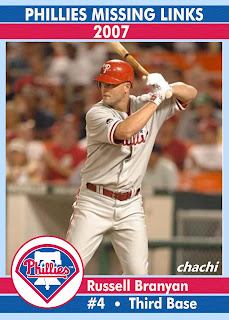 First a disclaimer . . . In the course of drafting this post, I discovered for the first time, that Russell Branyan does in fact have a Phillies baseball card!  Unbeknownst to me until now, Topps included him within their Year in Review insert set in 2008.  Please consider this Missing Links card an Uncorrected Error, as Branyan is not in fact a Missing Link.  Carry on.

Over the course of his 14-year big league career, Branyan played for 10 teams teams and the Phillies hold the distinction of being his shortest stop.  The Indians sold Branyan to the Phillies on August 9th in a move presumably designed with the intention of Branyan being used as a left-handed bat off the bench.  The move resulted in one big win for the team as Branyan hit a pinch-hit, two-run home run in his first at-bat for the Phillies on August 14th, giving the team a 3-2 win over the Nationals.  He'd have one more hit in a Phillies uniform (another home run) and it came during his only start with the team (at third base) on August 19th.  On August 27th, Chase Utley was activated from the disabled list and Branyan was designated for assignment.  He'd land with the Cardinals on August 31st - his fourth organization of the season.

Branyan's best season was on the horizon, as he hit 31 home runs and drove in 76 with the 2009 Mariners.  His last Major League appearance came in 2011 with the Angels, and he played professionally through the 2014 season during his fifth (!) stint within the Indians organization.

Phillies Career
7 games, .222 average (2 for 9), 2 home runs, 5 RBIs, 6 strikeouts
Acquired:  August 9, 2007 - Purchased from the Cleveland Indians.
Debut:  August 14, 2007 - Pinch-hitting for Antonio Alfonseca in the 8th inning in a game the Phillies were trailing 2-1 against the Nationals, hit a home run off Jon Rauch to give the Phillies a 3-2 lead.  Brett Myers struck out the side in the 9th to record his 10th save, pulling the Phillies to within 3 games of the Mets in the division.
Final Game:  August 25, 2007 - Pinch-hit for Tom Gordon in the 8th and struck out against the Padres' Heath Bell.
Departed:  August 31, 2007 - Traded to the St. Louis Cardinals for a player to be named later.