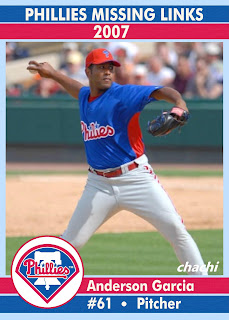 For a two week period in July 2007, Anderson Garcia was on the Phillies roster.  That was long enough for him to appear in one game on July 7th, pitching 2/3 of an inning, and to take part in the team's annual Photo Day promotion on July 14th.  Following that July 14th game, Garcia was optioned back down to the Triple-A Ottawa Lynx, never to return to the big leagues.  As photos of Garcia in a Phillies uniform were scarce back in 2007, I used the picture I took on that Photo Day for his 2007 Chachi card published here for the first time.

Signed as an amateur free agent in April 2001 by the Yankees, Garcia pitched professionally for 8 seasons within the Yankees, Mets, Orioles, Phillies and Mariners organizations.