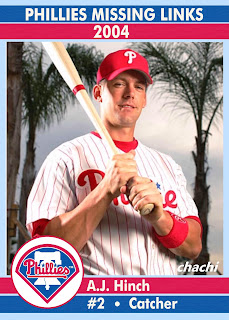 Before beginning his managerial career with the Arizona Diamondbacks in 2009, the last Major League action A.J. Hinch saw as a player was in four games with the Phillies at the end of the 2004 season.  As manager, he'd go on to lead the Houston Astros to the 2017 World Championship.

The Phillies signed Hinch as a minor league free agent in January 2004, and he'd spend most of the season splitting catching duties (with Michel Hernandez) with the Scranton/Wilkes-Barre Red Barons.  In need of a third catcher for the final month of the 2004 season, the Phillies purchased Hinch's contract and also recalled a young prospect named Ryan Howard as their only September call-ups.  Howard would stick around with the Phillies through the 2016 season, winning a World Series title along the way, but Hinch would retire as an active player following the 2005 season in which he toiled once again for the Red Barons.

Hinch is the first subject within this Missing Links project to first appear on a Chachi card.  Hinch was recalled in September 2005 when rosters expanded, but didn't appear in a single game that month for the Phillies.  His call-up earned him a card in the inaugural Chachi set.

Phillies Career
4 games as catcher - 1 for 11 (.182) with 4 strikeouts
Acquired:  January 15, 2004 - Signed as a minor league free agent, formerly with the Detroit Tigers.
Debut:  September 15, 2004 - Entered the game in the bottom of the first, replacing catcher Todd Pratt who left the game after colliding with Jim Thome on a pop-up.  Thome also had to leave the game and was replaced by Howard.  Hinch collected his only Phillies hit, a double off the Reds John Riedling in the 8th.
Final Game:  September 24, 2004 - In Montreal, entered in the bottom of the 7th as part of a double switch, replacing Mike Lieberthal.  He went 0 for 1 with a fly-out.
Departed:  October 29, 2004 - Granted free agency and signed as a free agent with the Florida Marlins, December 14, 2004.