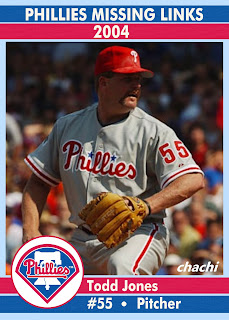 On July 30, 2004, with the Phillies only 4 1/2 games behind the Braves in the N.L. East, two of their top relievers - Ryan Madson and Billy Wagner - were injured and on the disabled list.  To bolster the bullpen, Felix Rodriguez was acquired from the Giants and Todd Jones was acquired from the Reds.  Rodriguez would appear in 23 games for the Phils and end up in the Upper Deck update series.  Jones would appear in four more games (27) and have to wait until now to receive a Philles Missing Links virtual card.

Todd Jones wrote a weekly column for The Sporting News back in the day, detailing life as a big leaguer, and one of the columns was about the fan mail players got asking for autographs and what they did with it. He mentioned that some players have been known to steam the stamps off return envelopes to use the stamps for their own personal mail. I will never forget that someone wrote in the most-thumbs-ups response something like, "Todd, you cheap b*****d, you're the only one that does that. I've mailed you cards five times and you never responded. All of your teammates respond, That leaves only you as the 'some players' that are too cheap to buy their own stamps."

Hahaha! Hoisted on his own petard!