One Sentence Summary:  Wilmer Flores hit a walk-off home run in the 10th off Victor Arano to give the Mets a Game 1, 4-3 victory.

What It Means:  Zach Eflin's streak of winning pitching performances was broken, as he allowed three runs in his five innings of work on the way to a no decision.

What Happened:  The Phillies offense couldn't capitalize on plenty of opportunities, going 2 for 13 with runners in scoring position.  Nick Williams had three hits and Maikel Franco hit a solo home run (11) in the 4th.

Featured Card:  Phillies Room favorite Ty Kelly was the 26th man added to the Mets roster for this double header.  He entered the game at third base as part of a double switch in the 5th, eventually going 0 for 2 at the plate.  (This card was originally featured in a post from early March.)

Transaction:  Drew Anderson was sent back to the IronPigs with Hoby Milner taking his spot on the roster.  Jake Thompson was also recalled to serve as the 26th man on the roster for the Phillies.

Field Report:  We spent the morning exploring Arches National Park in Moab, and I'm proud to report we made the difficult trek out to Delicate Arch.  It was a brutal hike, but definitely worth it once we got there.  Many bottles of water later, we piled back into our rental car and started the drive towards Denver, making a pitstop for the night in Glenwood Springs, Colorado.  We were able to listen to a portion of the Phillies broadcast of this double header through the At Bat app, and it was a little surreal to hear Scott Franzke's voice and we drove up and down through canyons, mountain ranges and valleys. 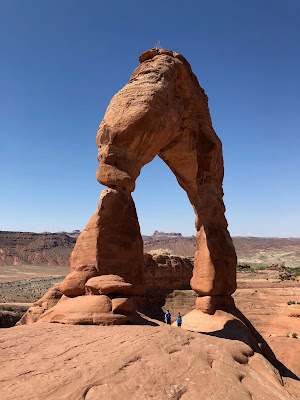