One Sentence Summary:  Pirates pitcher Nick Kingham shut down the Phillies offense through 6 innings and contributed a 2-run double in this 4-1 loss.

What It Means:  The Braves also lost, so the Phillies remain in a tie for first place.

What Happened:  Drew Anderson received a spot start, making his 2018 season debut with the Phillies.  He lasted five innings, allowing all four Pirates runs on eight hits.  The only Phillies run came from Nick Williams' solo home run (11) in the 4th.

Andrew Knapp became the first catcher in franchise history to bat lead-off.  The experiment didn't go well as Knapp went 0 for 4 with a strikeout.

Featured Card:  Drew Anderson is still in search of his first Phillies baseball card.  This is the most recent card of his in my collection, from the Top 30 Prospects set issued by the Reading Fightin Phils.

Transaction:  Anderson was recalled from the IronPigs prior to this game, taking the roster spot of Yacksel Rios who was sent down.

Field Report:  We listened to the Pirates broadcast of this game on XM as we drove across and up Utah, with a pitstop at Four Corners Monument.  If we ever form a family band and need a photo for our first album, I think this is it. 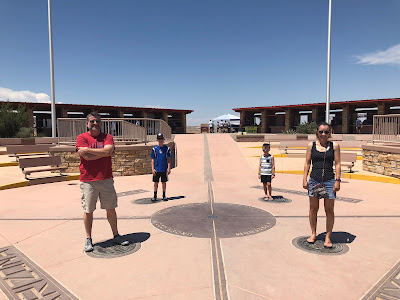