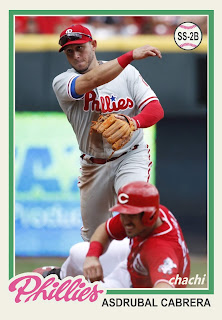 First Mention on The Phillies Room:  July 13, 2011 - 2011 All-Star Game . . . The Phillies sent five players to the All-Star Game, but only three were eligible to play in the game.  Placido Polanco was voted by fans to be the starting third baseman for the National League but he had to sit out due to lingering back problems.  Ironically enough, the man traded away by the Phils to originally acquire Polanco started at third in his place - Scott Rolen.  Shane Victorino won the fans' Final Man vote, but he landed on the disabled list right before the break.

Cole Hamels was named to the squad but he was not allowed to pitch as a result of a new rule which made any of Sunday's starting pitchers ineligible to pitch in the All-Star game.

So injuries and a silly rule meant only two of the Phillies five representatives saw action in Phoenix. National League starting pitcher Roy Halladay threw two perfect innings, inducing three ground-outs, two fly outs and a strike out of the Indians' Asdrubal Cabrera.  He needed just 19 pitches (14 for strikes) in his quick outing.

I was making some customs of traded players this morning, and *almost* used this same image for Asdrubal Cabrera. I'll just find myself another one now... :-)

The race is on for a good Aaron Loup in a Phillies uniform photo!