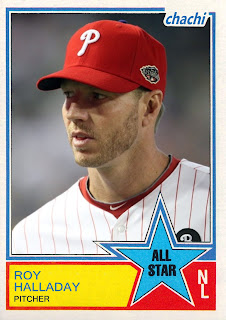 What It Means:  For better or for worse, the National League will now have home field advantage for the 2011 World Series.  It's a stupid rule, but I like that the Phils will be opening the series at home and not in Boston.

Phillies Report:  The Phillies sent five players to the All-Star Game, but only three were eligible to play in the game.  Placido Polanco was voted by fans to be the starting third baseman for the National League but he had to sit out due to lingering back problems.  Ironically enough, the man traded away by the Phils to originally acquire Polanco started at third in his place - Scott Rolen.  Shane Victorino won the fans' Final Man vote, but he landed on the disabled list right before the break.

Cole Hamels was named to the squad but he was not allowed to pitch as a result of a new rule which made any of Sunday's starting pitchers ineligible to pitch in the All-Star game.

So injuries and a silly rule meant only two of the Phillies five representatives saw action in Phoenix.  National League starting pitcher Roy Halladay threw two perfect innings, inducing three ground-outs, two fly outs and a strike out of the Indians' Asdrubal Cabrera.  He needed just 19 pitches (14 for strikes) in his quick outing.

Halladay was relieved in the third by teammate Cliff Lee, who retired David Ortiz, Robinson Cano and Alex Avila on successive ground outs.  Lee retired the first two batters in the fourth but then allowed an Adrian Gonzalez home run, which ended up being the only run scored by the American League.  Lee then allowed successive singles to Jose Bautista and Josh Hamilton before manager Bruce Bochy waved reliever Tyler Clippard in from the bullpen.  Fortunately, Bautista was thrown out at the plate by Hunter Pence when Bautista tried to score on an Adrian Beltre single.  And just like that, the Phillies were done with the All-Star Game.

Featured Card:  The 2011 Chachi set will have five All-Star cards this year, using the All-Star design from the original 1983 Topps set.  Halladay gets his own card this year after having to share a Chachi All-Star card last year with Ryan Howard.
Posted by Jim at 10:08 PM

Thankfully with the Sox recent habit of sweeping World Series, they'll play two in Boston after two in Philly. Two games in each means the home field advantage is meaningless.

As much as I'd like to see the Phils sweep in four, I'd be OK if the Red Sox forced us to clinch the Series at home.