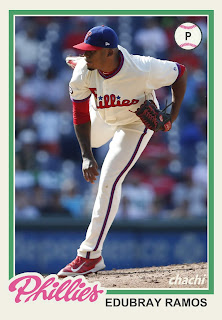 First Mention on The Phillies Room:  November 21, 2015 - Three Prospects Added to 40-Man Roster . . . The week before Thanksgiving is when all teams start to cobble together their 40-man roster in anticipation of the December Rule 5 draft.  I've tracked these pre-Thanksgiving additions over the past six years . . .

As I disclaim every year, I'm by no means an expert on prospects, but I can give you some information on the new additions' baseball card appearances to date.

Edubray Ramos (rhp) - Ramos split last season between Clearwater and Reading, earning a 2.07 ERA over 47 games and 69 2/3 innings pitched.  He had 65 strikeouts to just 16 walks over that span. To date, Ramos' only baseball card (that I know of) can be found in last year's Threshers team set.