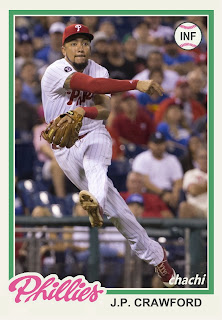 First Mention on The Phillies Room:  June 8, 2013 - Here's a card I recently received from the good folks at Phillies SGA. This Jim Bunning card was just one of many vintage Phillies oddball cards that Phillies SGA was kind enough to send my way.  Bunning was recently on hand to represent the Phillies at the amateur player draft, and he welcomed first round pick J.P. Crawford to the organization.

Second Mention on The Phillies Room:  September 1, 2013 - Goodbye Young, Hello BlueClaws . . . We packed up the boys and made the 90-minute trek to Lakewood, NJ on Saturday night to take in a Single-A Lakewood BlueClaws game.  An inning into the game, I was telling my wife that we definitely need to go to more minor league games.

Our seats were awesome, the food was good, the tickets were cheap, the players were nice and the boys had fun.  On top of that, we got to see some good baseball and get more familiar with players who could be appearing in Chachi sets by 2015 or 2016.  In particular, this year's first round pick, J.P. Crawford, looked fantastic on a few plays at short.

I bought Doug a BlueClaws team set and he had fun before the game tracking down autographs of several BlueClaws players and former Phillie (now coach) Aaron Fultz.  Art Charles, Larry Greene, Jr., and Chace Numata were very accommodating with their autographs and they helped to make my son's night.

We'll be going back to a game next season as the 90-minute drive was definitely well worth it.