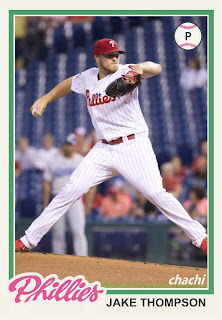 Jake Thompson (RHP - AA) - Thompson was ranked the second best prospect in the Rangers system in Baseball America's pre-season rankings.  In 17 starts with the Frisco RoughRiders this season, he's 6-6 with a 4.72 ERA and 78 strikeouts in 87 2/3 innings.  Thompson has been featured in multiple Topps Heritage Minors and Topps Pro Debut sets since 2010, and his most recent mainstream card was in the 2015 Bowman Inception set.