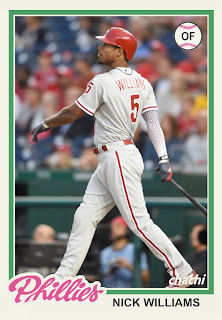 Nick Williams (OF - AA) - Williams was ranked the fifth best prospect in the Rangers system in Baseball America's pre-season rankings.  In 97 games this season with Frisco, he's hitting .299 with 13 home runs and he's split time between center and right field.  Williams started appearing in Bowman releases in 2012 and his most release mainstream baseball cards can be found in the 2015 Bowman Prospects insert set and the 2015 Topps Pro Debut set.