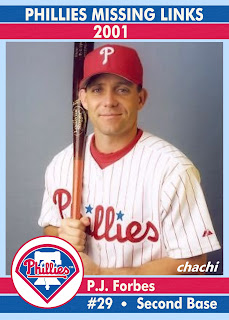 P.J. Forbes was signed by the Phillies as a minor league free agent prior to the 2000 season, spending that entire year with the Triple A Scranton/Wilkes-Barre Red Barons.  It looked as if he'd also spend the entire 2001 season with the Red Barons without a call-up when the Phillies purchased his contract on September 17th.  That day was an emotional day for the country and the baseball world as it marked the return of baseball following the September 11th terrorist attacks.  Forbes and his teammates lined up for the pre-game ceremony and the National Anthem and he appears on the United We Stand subset card found within the 2002 Topps set, in between teammates Eddie Oropesa and David Coggin.

Forbes appeared in 3 games for the Phillies at the end of the 2001 season and then spent the entire 2002 season back with the Red Barons.  After his playing days, Forbes came back to manage in the Phillies' system, leading the Lakewood BlueClaws (2004-05) and the Reading Phillies (2006-08).

Phillies Career
3 games - two as pinch-hitter, one at second base, 2 for 7 (.286) with an RBI
Acquired:  Signed as a minor league free agent formerly with the Baltimore Orioles organization, November 2, 1999.
Debut:  September 30, 2001 - Pinch hit for Jimmy Rollins in the ninth inning, grounding into a force out against the Marlins' Antonio Alfonseca.  Marlon Anderson scored on the play.
Final Game:  October 7, 2001 - Started at second base in the final game of the season, going 2 for 5 with two singles.
Departed:  October 15, 2002 - Granted free agency.

This is a continuing series looking at those players who spent time with the Phillies but possess no baseball card proof of their time in Philadelphia.  In some cases, the First and Last Mainstream cards listed above have been subjectively chosen if multiple cards were released in that year.
Posted by Jim at 9:00 AM