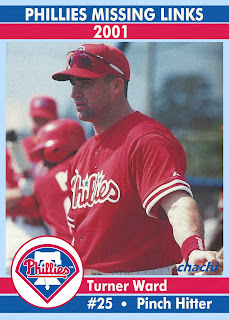 During the final season of his 12-year big league career, Turner Ward walked to the plate 17 times for the Phillies but never spent an inning in the field playing defense.  Manager Larry Bowa used Ward to pinch-hit 17 times in 2001, and Ward came through in a handful of those at bats, tallying a double, four hits and a walk.  A non-roster invitee to spring training, Ward began the season with the Scranton/Wilkes-Barre Red Barons but was recalled in mid-June.  In his first at-bat, he contributed a two-run single off Orioles reliever Buddy Groom and those were to be his only two RBIs as a Phillie.  Ward was sent back down in early July, earned a quick two-game return back in late July and was designated for assignment on July 27th ending his time with the Phillies.

Prior to his short Phillies career, Ward was a prospect in the Yankees organization before being shipped to the Indians in the March 1989 Joel Skinner/Mel Hall deal.  Ward's best seasons were with the 1994 Brewers (9 home runs, 45 RBIs) and the 1998 Pirates (9 home runs, 46 RBIs).

Phillies Career
17 games - all as a pinch-hitter, 4 for 15 (.267) with a double, 2 RBIs
Acquired:  Signed as a minor league free agent formerly with the Arizona Diamondbacks organization, December 20, 2000.
Debut:  June 17, 2001 - Pinch hit for Rheal Cormier in the eighth inning, singled to center and drove home Johnny Estrada and Marlon Anderson.
Final Game:  July 27, 2001 - Pinch hit for Cliff Politte and was hit by a pitch by Mets pitcher Steve Trachsel.
Departed:  October 8, 2001 - Granted free agency.