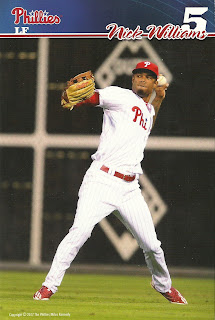 Of interest to probably just a few of us collectors (I'm looking at you, Rick and Steve), I recently (and surprisingly) added a new Nick Williams team-issued photo card to my collection.  The card is in the style of the regular 2017 team-issued photo card set but with a blank back.  Williams was not included in the early season release of the original 40-card set, but he'd appear in the late season 14-card update set.  This update set used a completely different design from the 40-card set.

We already knew of the existence of cards for Zach Eflin, Mark Leiter Jr. and Nick Pivetta bearing this design, as these cards were made available at the Phillies Phestival held in May.  But now I can add the Williams card to the list of set rarities as well.

So how did this card come into my collection?  My wife and I recently attended the 40th Anniversary Gala of the Philadelphia ALS Association.  The Phillies are a huge sponsor for this terrific organization, and the team had contributed several items to the silent and live auctions that were part of the event.  We were fortunate to bid on and win a Phillies prize package thanks to the astute bidding skills of my wife Jenna.  One of the items we won was an autographed bat from Nick Williams.  The bat was shipped to our house last week and this card was included within the box, seemingly to help the winner identify the signer of the bat.

The moral of the story is when you support an amazing charitable organization, doing great work for ALS patients and their families in the Philadelphia region, you may end up inadvertently adding a rare Phillies team-issued photo card to your collection! 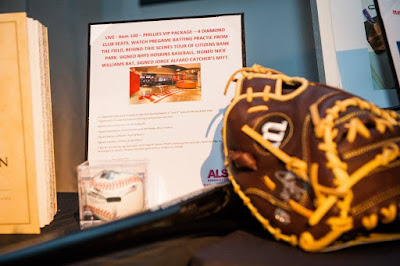 Did Hoskins ever make it in the Team Set (Probably Not??)

He's only in the late season update set:

Very nice pickup there—the whole lot, of course, but the card was a nice bonus! And I like when a photo card is in an ALS grab bag at the Phestival, I’m guessing this one wasn’t bent. Hoskins is signing at the Philly Show on December 2 for more than Carlton (but less than Schmidt), so getting a signed ball of him is a good pickup too.