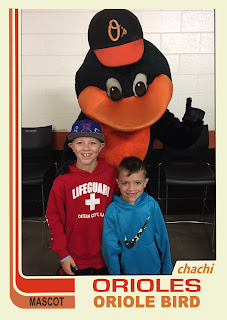 What It Means:  Pedro Florimon, who had been playing well the last few weeks, had to be carted off the field in the second when he suffered a gruesome ankle injury trying to reach first base.

What Happened:  The decisive blow in this game turned out to be a three-run, pinch-hit home run from Derek Dietrich in the seventh off Ricardo Pinto.  Giancarlo Stanton (52) and Marcell Ozuna (32) had homered earlier in the game for the Marlins.  For the Phillies, Rhys Hoskins (12) and Tommy Joseph (20) homered while Nick Williams added a three-run triple in a five-run eighth inning.

Transaction:  For the second time in three days, the Phillies claimed a relief pitcher off waivers.  This time it was Kevin Siegrist claimed from the Cardinals.  Jerad Eickhoff was moved to the 60-day disabled list to clear room on the 40-man roster, ending his season.

We missed this weekend of Phillies baseball as we took the boys to Baltimore for their first trip to Camden Yards.  The Blue Jays easily handled the Orioles in a soggy 7-2 win with Kevin Pillar, Josh Donaldson and Darwin Barney all homering for the Jays.  Marcus Stroman had to leave the game in the second after getting smoked with a Mark Trumbo line drive off his right elbow.

Earlier in the day, we toured Camden Yards where the boys met up with Oriole Bird.  Doug was unsuccessful in his pre-game autograph hunt, other than an autograph from the ubiquitous Bird.

Both boys came away with baseballs!  Doug was the lucky recipient of a ball thrown from the dugout from an anonymous Oriole and a ball thrown into the stands between innings from Chris Davis. Before the game began, from our seats in Section 22, Ben was called over to the Orioles dugout by coach (and former Phillies pitcher) Roger McDowell.  McDowell rolled Ben a ball, and the kid's night was made.

Too bad that the autos didn't work out, but getting balls is cool, and hey... Section 22! Not too shabby!

You were so close to Section 36! Glad you enjoyed the game. I still need to get to that park.

On the autos . . . stay tuned for the Sunday afternoon game post!

S36 - You've got to get there. I don't say this lightly, but I believe Camden Yards is my favorite ballpark.