Baltimore: Babe, Autographs and a Trumbomb 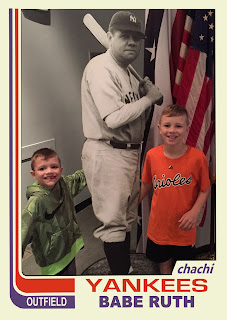 What It Means:  The Phils took three of four in Miami and they'll open a three-game series in New York against the Mets on Labor Day afternoon.

What Happened:  Adam Morgan deserves credit for this win as well, pitching three innings of scoreless relief.  Thompson allowed one run and struck out seven over six innings.

Transactions:  Cameron Perkins and Thompson were recalled from the IronPigs, bringing the number of players on the Phillies active roster to 29.

In the morning, we toured the Babe Ruth Birthplace and Museum where our sons met up with the Babe.  We were at the ballpark when the gates opened, snagging two of the Orioles hats given away to the first 20,000 adults through the turnstiles.  Doug positioned himself along the first base line and was much more successful with his pre-game autographs, adding signatures from the Oriole Bird (again), Richard Bleier, Darren O'Day, former Phillie Alec Asher and Wade Miley to his ever-growing collection.  The Bird and Asher signed the Camden Yards card available in the Topps Orioles retail team set. 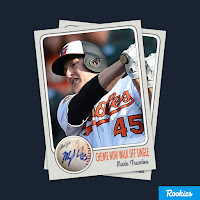 But Doug's personal highlight was receiving an autograph from Orioles slugger Mark Trumbo. Trumbo signed the "Chris Davis baseball" Doug had retrieved on Saturday night and the ball is now proudly displayed in Doug's bedroom.  Using the Rookies App, Doug has started his own set of custom cards, and in the spirit of me naming my custom cards after our first dog Chachi, his cards are named after our second dog, Chewbacca.  Here, reproduced with Doug's permission, is his "Chewie Now" card featured Trumbo and his autographed baseball.

If you're hungry when you visit Camden Yards, I can highly recommend the Boog Turkey sandwich with kettle chips for your next visit.  Jenna would recommend the crab soup and we'd all recommend the O's soft pretzels.  We also found you can't go wrong with nachos, popcorn and peanuts.  (I was bummed that Boog Powell wasn't in his usual spot for either games on Saturday and Sunday.)

And they played a baseball game too!  We enjoyed the game from the shade of Section 15 as Trumbo's RBI single in the 12th provided a walk-off 5-4 win.  Before Trumbo's walk-off single, he had hit his 21st home run in the fourth.  Wellington Castillo had two home runs and All-Star Jonathan Schoop had a three-hit day.  As Baltimore was relatively easy for us to get to, and we all thoroughly enjoyed ourselves, we're already planning a return trip for next summer. 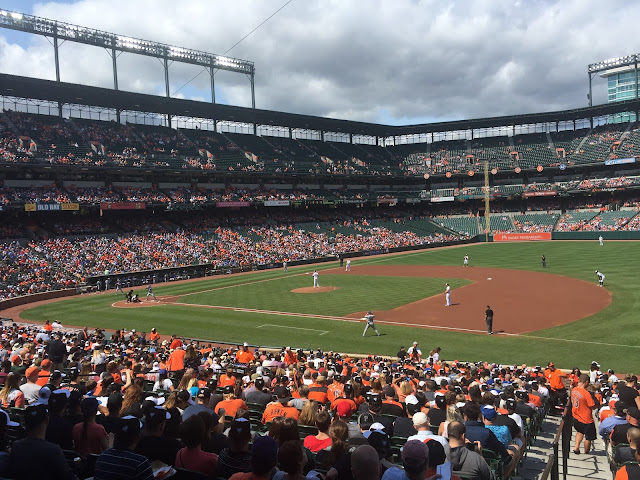