Wall of Famers Return and Doug's Big Night of Autographs 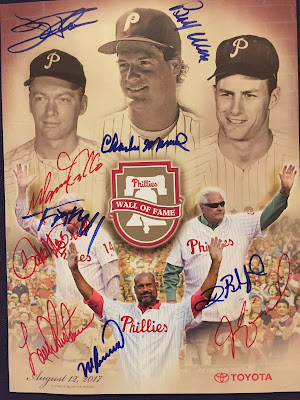 One Sentence Summary:  The Wall of Famers returned for a pre-game ceremony and Aaron Nola continued his dominant second half performance as the Phillies won, 3-1.

What It Means:  This was Nola's 10th consecutive outing allowing two runs or less, which no other Phillies pitcher has accomplished since 1893.


Featured Cards/Field Report:  Doug and I attended this game, and while none of the current Phillies were signing autographs pre-game, he was able to get quite a few autographs later in the Hall of Fame Club.

The Phillies brought back past Wall of Fame inductees for an on-field ceremony, and they then paid tribute to Jim Bunning, Dallas Green and Darren Daulton.  All three Wall of Famers had passed away this year.  Mike Schmidt delivered an emotional speech remembering each of the former Phillies, and he also recognized Ruben Amaro, Sr., who had passed away earlier this year as well.

Around the fifth inning, we decided to take a walk and as is normally the case during Alumni Weekend, there was a large contingent of autograph seekers stationed outside the suite where the alumni were holding their reunion.  As alumni entered and exited the suite, some would pause to sign while others would not.  Here's a summary of our night:


Tony Taylor . . . the Phillies great singled out Doug and spent about two minutes talking to him.  He talked about the players on the print, he told Doug to follow his dreams and he told Doug to never give up.  He talked about kindness and helping others and hard work.  He wanted Doug to promise to never throw away the print and to remember everything he had told him.  Finally, he told Doug to pass on everything to his kids and to bring his kids to Phillies games when they were older.  Doug took it all in.  I took it all in.  It was a very cool moment.
There were throngs of people around Thome and Manuel, so I didn't get good photos of those two, but I've created a custom card set for the other autograph signers.  It was a fantastic experience for Doug (and me) and one neither of us will soon forget.

I would find it overwhelming, to be surrounded by so many great Phils and bet Doug talks about this night for a very long time to come. The photos are wonderful! Thanks for sharing!

What a cool experience. Would love to one day meet Jim Eisenreich. That guy always seemed to get a clutch hit. Also nice to see Trillo and McBride. Shame Victorino wasn't willing to stop and hang with the fans.

Thanks! It was truly a great experience.

What a fantastic experience!

There's something pathetic about older men lining up to get ballplayers' autographs.

Jim from Downingtown . . . to be fair, and fellow collector Rick has corrected me on this point . . . to each his own. Doug was able to get all the autographs he wanted even with the older collectors there, and I have to respect the true collectors who have been doing this for 40+ years for love of the game and the hobby. I was simply happy to see Thome and some other signers go to Doug first and then oblige the older collectors.

What a great day for you and your son--and I love the Bobby Wine cap brim-bending incident! Doug will have a good story for his Little League friends about why his cap looks like that.

I am obviously on the same page as you and Rick about autographs. And thousands of adult Phillies fans each year vote with their wallets on the issue when they attend the Phillies ALS Fan Phestival and line up to get ballplayers' autographs.