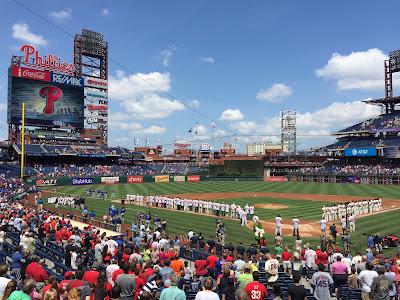 One Sentence Summary:  The Mets dampened the good vibes brought on by the annual Phillies Alumni Day, defeating the Phillies 6-2.

What It Means:  The Mets took three out of four in this series, and the Phillies now head to the West Coast for games in San Diego and San Francisco.

What Happened:  Zach Eflin allowed home runs to Michael Conforto and Curtis Granderson in his 5 1/3 innings of work.  The Phillies went 2 for 11 with runners in scoring position, failing to capitalize twice with the bases loaded.  The fifth inning was cut short when Odubel Herrera ran right into an out at third, as Freddy Galvis was already manning the base.  Rhys Hoskins collected his first big league hit and RBI.


Featured Cards/Field Report:  My wife Jenna and youngest son Ben joined in the fun for this game, as the four of us set out to meet some more Phillies alumni.  The Phillies truly do a great job with this stuff.  Before the start of the game, five tables were set up throughout the ballpark, each with two members of the 1980 World Championship team signing autographs.  We made it to four of the five tables, with the boys getting autographs from Warren Brusstar, Dickie Noles, Bob Boone, Bake McBride, Larry Christenson, Marty Bystrom, Manny Trillo and Greg Luzinski.

We settled into our seats and enjoyed the pre-game ceremony introducing over 40 former Phillies players and once again honoring the late Darren Daulton.  Members of the 1993 Phillies team each appeared on the field wearing Daulton's #10 jersey.


Mid-way through the game, we walked over to an alumni photo both and the boys had their pictures taken with Jim Eisenreich, Milt Thompson, Kevin Stocker and Tommy Greene.  Doug added autographs from Stocker and Greene to the Wall of Fame print he had received on Saturday night. By Doug's tally, he added 22 (!) alumni autographs to his collection on Saturday and Sunday.

I should also mention we received four 15-card packs of the special Topps National Baseball Card Day Phillies sets as we entered the ballpark.  This is a fantastic giveaway, the only problem with it being there are 20 cards in a complete set.  With the four packs we received, we were able to put together only two complete sets.  Still, it's a great looking set and Jenna and Ben don't seem to mind too much (yet) that their sets are missing a few cards.

It's nice to see the Phils giving out baseball cards again as a giveaway. I don't recall them doing that since the 2007 Alumni set (although I think the Disabled American Veterans have given out a set or two at games since then). Is there player-specific commentary on the back or is it a big Topps ad?

Based on the blue (empty) seats visible in the photo, hopefully they have a lot of extras that will be made available at some point, maybe the Xmas sale.

I see alumni postcards on Bake McBride's table. Were there others available?

Each of the Wall of Fame cards have a short write-up on the subject's career, and they're actually quite nice together as a set.

As for new Alumni postcards, with help from Rick: