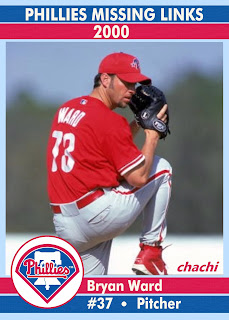 Bryan Ward pitched relatively well in his 20-game cameo with the 2000 Phillies, compiling a 2.33 ERA over 19 1/3 innings.  Having appeared in 68 games with the White Sox in 1998 and 1999, Ward was signed as a minor league free agent and invited to spring training as a non-roster invitee in 2000. He wouldn't make the opening day roster, but his services were required on May 30th when fellow lefty Scott Aldred landed on the disabled list with a shoulder injury.  His spot in the bullpen seemingly secure, Ward was the odd-man out on July 26th when Curt Schilling was traded to the Diamondbacks and the Phillies needed to open a 40-man roster spots for their four newly acquired players - Travis Lee, Omar Daal, Nelson Figueroa and Vicente Padilla.

Ward was designated for assignment, clearing waivers and ultimately being outrighted back to Scranton/Wilkes-Barre.  His time with the Red Barons was short, as he was released on August 12th and signed with the Anaheim Angels on August 16th.  Ward would appear in seven games for the Angels, marking the end of his big league career.