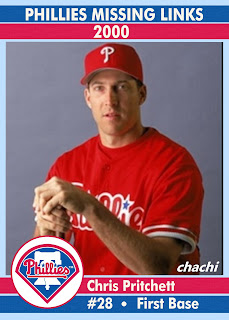 A second round pick of the California Angels in 1991, Chris Pritchett spent the decade of the '90s playing with the Angels organization before finishing up his big league career with the Phillies in 2000.  Pritchett appeared in 56 games over three seasons with the Angels before signing with the Phillies as a minor league free agent following the 1999 season.  He was a non-roster invitee to spring training in 2000, starting the season in Scranton/Wilkes-Barre before getting called up to the Phillies on May 11th after Rico Brogna broke his arm.  Pritchett lasted nine days on the active Phillies roster before Pat Burrell was recalled from the Red Barons to take over at first base.

Pritchett wouldn't make it back up to the Phillies in 2000 and he was let go following the season.

Phillies Career
5 games, .091 (1 for 11), 3 strikeouts
Acquired:  Signed as a minor league free agent formerly with the Anaheim Angels, November 1, 1999.
Debut:  May 14, 2000 - Started at first base going 1 for 3 against the Braves, including his sole Phillies hit against John Burkett.
Final Game:  May 23, 2000 - Pinch-hit in the fourth inning for Randy Wolf, drawing a walk against the Astros' Chirs Holt.
Departed:  Granted free agency on October 3, 2000, and signed with the Anaheim Angels organization that offseason.