Phils Lose in Extras to the Sox; Select Haseley with 8th Overall Pick 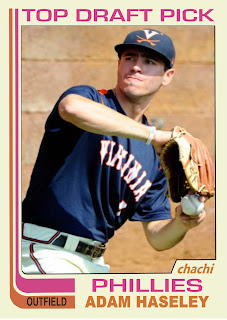 One Sentence Summary:  The Phillies couldn't make a four-run first inning hold up as the Red Sox took this game in extras, 6-5.

What It Means:  It's still not going well.  Jerad Eickhoff showed signs of improvement, allowing four runs (three earned) in his six innings, but the young pitcher is still winless for the season.

What Happened:  Joaquin Benoit allowed a game tying home run to Hanley Ramirez in the eighth, earning his third blown save.  Casey Fien, in his third inning of work, allowed the winning run to score in the 11th on a Dustin Pedroia single to right.

Daniel Nava played fine defense and enjoyed a three-hit game.  Howie Kendrick also had three hits and became the first Phillie to steal three bases in a game since Ben Revere did it in 2013.

Featured Card:  With the eighth overall pick in the amateur player draft, the Phillies selected outfielder Adam Haseley from the University of Virginia.  The last collegiate position player the Phillies selected with their first draft pick was Chase Utley in 2000.  As a junior with the Cavaliers, Haseley hit .390 with 14 home runs and 56 RBIs.  He also had an impressive record of 7-1 with a 3.58 ERA as a pitcher, but the Phils will develop him solely as an outfielder.