This post is no longer being updated. Please see here for an updated post and Checklist for the Phillies Alumni Photo Cards.


This is a post a long-time in the making and one that will most likely be revised frequently.  Since about 2007, the Phillies have been issuing Alumni photo cards for returning players to sign at various meet and greet opportunities.  I'm going to attempt to checklist those photo cards here based on cards in my collection and help from fellow collectors.  I've already received some input from Rick (@rickphils) and Steve F. and I'm hoping they'll both weigh in with additions needed to the list below.

Complicating any efforts to fully checklist these cards is the fact that the Phillies had originally printed the cards with a copyright date on the back reflecting the date of issuance.  More recently, the copyright date on the backs of these cards is for the date of the photo on the front.  For example, I'm fairly certain the Randy Ready card shown above was available during the 2016 Alumni Weekend festivities in August, but the card contains a 1995 copyright date which corresponds to the photo used for the card.

Update, 6/10/18 - As part of a weekend-long celebration of the 25th anniversary of the 1993 N.L. Champion Phillies team, on Sunday, June 10th, seven autograph stations were set up throughout the ballpark with 3 players at each table signing Phillies Alumni photo cards until supplies lasted.  Fellow collector Rick provided a photo of the table listing below and he also provided some additional notes on available Phillies Alumni photo cards.  As always, if you have any of these cards and you'd like to send them to a good home, please contact me! 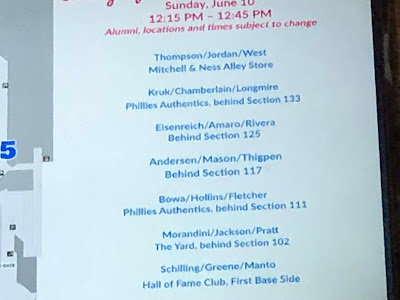