Doug and I made the hour-long trek to Valley Forge on Saturday morning so that he could spend the entirety of his allowance and birthday money at the Philadelphia Sportscard & Memorabilia Show. With only a few checklists in tow and no real plan in place, we decided we'd both enjoy a morning of free-style pickin' and just see what we could find.  Doug made out great, obtaining quite a few certified autograph cards for his growing collection, including his two new favorite treasures - the very impressive, and very thick, on-card, gold-framed autographs of Aaron Nola and Maikel Franco from the 2016 Topps Gold Label set.  He's still trying to figure out how best to store and display these cards.

He was also very pleased with the addition of two Hall of Fame rookie cards to his collection - a nice 1983 Topps Wade Boggs (for $2!) and a nearly destroyed 1975 Topps Robin Yount (for $1).

Here's a summary of what I picked up:
One of the highlights of the day, at least for me, was meeting former Phillies and Brewers third baseman Don Money.  Money was the sole former baseball player signing at the show.  I printed a copy of a newspaper article featuring Money and my Dad from 1970 (see below, my Dad is the Coach) and I asked him to sign it.  He graciously obliged and noted that the photo looked to be "at least a few years old."  He was also kind enough to pose for a photo with Doug. 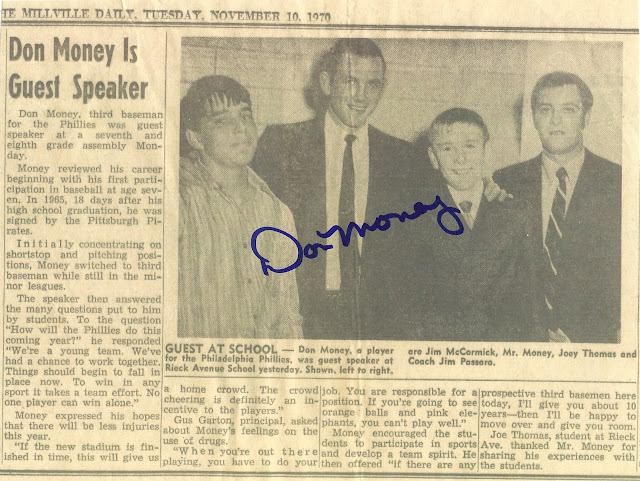