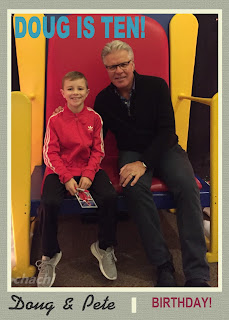 This is a milestone birthday for my oldest son Doug as he turns ten years old today.  Doug and I attended the Phillies holiday festivities yesterday where he had a chance to meet Phillies manager Pete Mackanin and pick up another autograph for his growing collection.

Doug continues to amaze us.  He's hard-working, determined, kind, curious, athletic, funny and cool, and we couldn't be prouder of him!