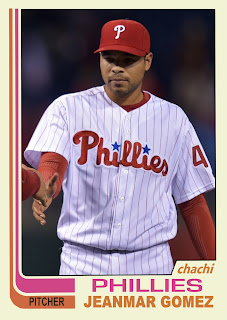 One Sentence Summary:  Jeremy Hellickson left his final Phillies start with a knee injury, Jeanmar Gomez continued his second half implosion and the last-place Braves completed their series sweep of the Phillies, with a 5-2 win.

What It Means:  As pointed out by Jim Salisbury, the Phillies have allowed 63 runs in their last six games, the most in any six-game stretch since 1937.

What Happened:  Hellickson left in the fourth with the injury, and it's likely this could have been his final appearance with the Phillies.  He'll seek a multi-year deal in free agency this offseason.

Featured Card:  Gomez entered the eighth inning trying to preserve a 1-1 tie.  He retired one batter and allowed four runs on three hits and two walks.  His September ERA was 19.13 (17 earned runs in 8 innings pitched).

Want to revisit every game of the 2016 season?  My handy game summary index can be found here.
Posted by Jim at 3:00 PM