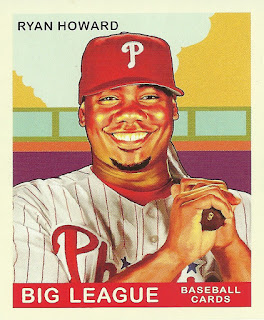 One Sentence Summary:  Ryan Howard hit a clutch two-run home run in the fifth inning, but the Mets would quickly retake the lead and eventually win, 5-3.

What It Means:  The win clinched a Wild Card berth for the Mets and they'll face off against either the Giants or Cardinals on Wednesday.  The Phillies will be watching this game with the rest of us.

What Happened:  Howard hit his 25th home run of the season, and his .199 season average is oh so close to the Mendoza Line.  Phil Klein did well in the start in this bullpen game, allowing a run over four innings.  Each reliever to follow him, with the exception of Joely Rodriguez, allowed a run.

Featured Card:  I'll admit that Howard's final series with the club has me feeling nostalgic and slightly blue.  When he plays his final game with the Phillies tomorrow, he'll depart as the last link to the late 2000s/early 2010s glory years.

Want to revisit every game of the 2016 season?  My handy game summary index can be found here.
Posted by Jim at 6:00 PM

Email ThisBlogThis!Share to TwitterShare to FacebookShare to Pinterest
Labels: 2007, Howard