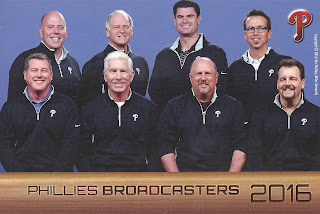 One Sentence Summary:  In his final start of the season, Adam Morgan was hit hard and the Phillies dropped another laugher, 12-2.

What It Means:  Ryan Howard and A.J. Ellis called a players only meeting following this latest loss, discussing the need to finish strong over the final four games.

What Happened:  Morgan finished the 2016 season with a 2-11 record and a 6.04 ERA.  In five innings, he allowed nine runs on 10 hits.  Phil Klein entered the game in the sixth and by keeping the Braves off the scoreboard for that one inning, he became the first Phillies reliever in 11 appearances to not allow a run.

Featured Card:  This is as good a time as any for my annual show of appreciation towards the Phillies primary radio broadcasters - Scott Franzke and Larry Andersen.  I've mentioned before how my preferred method of enjoying a Phillies game is with the television muted and the radio broadcast synced up to the video.  Franzke and Andersen are a fantastic team and they've made the last few weeks of dreadful Phillies baseball almost bearable.

Want to revisit every game of the 2016 season?  My handy game summary index can be found here.
Posted by Jim at 4:00 PM