One Sentence Summary:  Jared Eickhoff allowed four home runs and relievers Severino Gonzalez and Colton Murray poured gasoline on this dumpster fire of a game as the Phillies lost, 15-2.

What It Means:  Well that escalated quickly.

What Happened:  Until the train went completely off the tracks in the seventh inning, Eickhoff had allowed just three hits but all three were solo home runs.  Gonzalez (2/3 inning, 3 hits, 2 walks and 5 runs) and Murray (1/3 inning, 4 hits and 3 runs) made sure the game was completely out of reach.

Featured Card:  As we were driving home, Scott Franzke relayed that Eickhoff was the first Phillies pitcher to surrender four home runs but only three earned runs since Don Carman in 1987.  Eickhoff should have been out of the seventh, but Maikel Franco booted what should have been the third out of the inning.  The next batter, Jordy Mercer, hit a pinch-hit, three-run home run and all three runs were unearned.

Field Report:  Jenna and I were at this game along with a few thousand fellow Phillies and Pirates fans.  As expected, we had plenty of leg room and we mercifully left the ballpark after Mercer's home run.  We were both disappointed to see that Roman Quinn has not yet been given a giant Topps baseball card in the starting line-up display in Ashburn Alley. 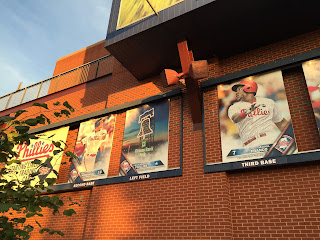 Please vote in the poll on the sidebar if you haven't already.  Thanks!
Posted by Jim at 2:00 PM

I'm way behind in my commenting, so I'll summarize here...

Boo, Phillies for not having a giant-sized card of Roman Quinn!