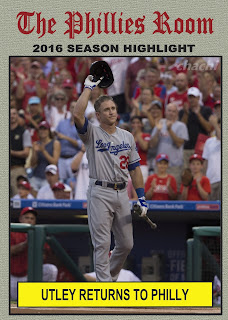 One Sentence Summary:  Chase Utley returned to Philadelphia, hitting a solo home run and a grand slam as the Dodgers annihilated the Phillies, 15-5.

What It Means:  It's amazing to me that the largest ovation witnessed this season at Citizens Bank Park was after a visiting player had hit a home run.  But then again it wasn't any normal visiting player.  Utley's return resulted in an electric atmosphere at the ballpark and it was an emotional night for him and this long-time Phillies fan.

What Happened:  Does it really matter, other than one of the most beloved players in franchise history returned after nearly a year in Los Angeles?  Vince Velasquez couldn't make it through six full innings again, allowing five runs on seven hits.  Elvis Araujo had an awful night, allowing six runs on just two hits in the seventh inning.  He walked three (two with the the bases loaded) and hit a batter (again with the bases loaded.)  Michael Mariot allowed the Utley slam after Araujo had departed.

Field Report:  Adding to the surreal atmosphere was the fact that it was Beatles Night at the ballpark, commemorating the 50th anniversary of the Fab Four's final Philadelphia concert on August 16, 1966.  I don't mention it often on this blog, but I am an unbelievably huge Beatles fan and the combination of the Beatles and the Phillies was a bit of sensory overload for me.  (Click the photos below to enlarge.)

The four of us (Jenna and our two boys) joined the crowd at the ballpark greeting Utley with a standing ovation as he led off the top of the first and his familiar walk-up music (Kashmir) played. Jenna took the night off from rooting for the Phillies and openly rooted for Utley and his Dodgers. The heat got the best of us though, and we had departed the ballpark sauna prior to Utley's seventh inning grand slam.

Be sure to check out the 2016 Season Summary page with game results and links to game summary posts.
Posted by Jim at 9:00 PM

It's great that the fans would give Utley a standing ovation, but I find it a tiny bit curious that the Phillies would play "Kashmir" for him... Or do they normally play walk-up music for visiting players?

I don't know how the Beatles tribute band sounded, but they get bonus points for having a left-handed "Paul".

Utley is loved for whomever he plays. Just sayin', Mets fans.

I saw a Beatles tribute band at a wedding maybe about 10 years ago. They were all dressed up in Sergeant Pepper's uniforms, and looked and played spot-on.

The playing of Kashmir was a one-time thing for Utley, and they didn't do it again when he came up to bat the second time.

I'm always very impressed by Beatles tribute bands and even more impressed that there's o many of them! And the left-handed Paul definitely gets extra points.

In the mid-1990s, I took my son (who was about 5 years old at the time, and already a huge Beatles fan) to a Beatles tribute show in Lancaster County, PA, at a hotel ballroom almost across US Rt. 30 from Dutch Wonderland. It was a dinner-theater setup, and our table was front and center.

"Paul" was so impressed that my son was singing along to all the songs that he came over to us after the show and chatted for awhile. My son began telling "Paul" all about his Beatles record collection (yes, vinyl records!), to which he told my son "Wow, you have more Beatle records than I do!"