One Sentence Summary:  In what could be his last home appearance with the Phillies, Jeremy Hellickson delivered his best-pitched game of the year and the Phillies defeated the Marlins, 4-1.

What It Means:  This was the sole bright spot in an otherwise dreadful series with the Marlins.

What Happened:  Hellickson pitched eight innings for his seventh win, allowing just five hits and striking out eight.  Jeanmar Gomez pitched a quick ninth inning for his 26th save.  Getting a rare start, Tyler Goeddel drove in three runs on two hits, including a two-run home run (4) in the first. 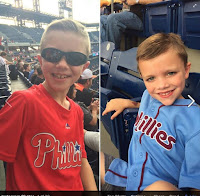 Featured Card:  I'll be sorry to see Hellickson go, but if he can bring a few more pieces to help out in 2017 (and beyond), so be it.

Field Report:  Occasionally, I'm asked to attend a Phillies game for work purposes and I'm fairly certain I've never once declined such an opportunity.  So while I was performing my professional responsibilities in the Diamond Club for this game, Jenna and the boys decided to use our normal tickets and enjoy the game from Section 319.

Be sure to check out the 2016 Season Summary page with game results and links to game summary posts.
Posted by Jim at 11:00 AM