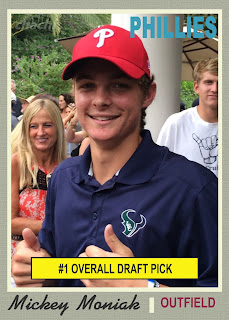 On Thursday night, the Phillies' futility in 2015 paid off with the first overall pick in the annual amateur player draft.  After months of speculation about who the first pick would be (A.J. Puk? Jason Groome?) the Phillies chose outfiedler Mickey Moniak from La Costa Canyon High School in California.  Moniak joins Pat Burrell (drafted in 1998) in the exclusive Phillies #1 Overall Draft Pick Club.

The 18-year-old Moniak, who graduated from high school yesterday, and the Phillies hope to reach a deal as soon as possible.  The next two picks by the Phillies were high school pitcher Kevin Gowdy (#42 overall) and high school shortstop Cole Stobbe.

Only time will tell if these draft picks pan out, and until Moniak has his official debut in a Chachi set around 2022 or so he'll just have to settle for this limited edition Chachi Almost card.

I saw a picture of Moniak in a high school uniform that has the same logo as on his golf shirt. I'm amusing myself by thinking of the Houston Texans' lawyers looking up a phone number and address for La Costa Canyon HS.

I thought the same thing . . . Also felt a little creepy making a custom card of someone born in 1998. Getting old.