One Sentence Summary:  Making his Major League debut, Zach Eflin couldn't escape the third inning and the Blue Jays went on for an 11-3 win.

What It Means:  Per this Tweet from Matt Gelb, Eflin's eight earned runs in his debut are the most allowed by a Phillies pitcher making his debut since Russ Miller in 1927.  Severino Gonzalez (2015) and Rafael Quirico (1996) allowed seven runs in their Phillies debuts.

Featured Cards:  Gavin Floyd finished out this game for the Blue Jays, marking the first time in the veteran's 13-year career that he's faced off against his original team.  Floyd was the Phillies' first round pick (fourth overall) in the June 2001 amateur player draft.  In three years with the Phillies (2004-2006), Floyd went 7-5 with a 6.96 ERA.  In one of the worst Phillies trades in recent memory (and that's saying a lot) Floyd was traded with Gio Gonzalez to the White Sox on December 6, 2006 for Freddy Garcia.

Connecting Floyd to Eflin, the television broadcast included the graphic shown below.  Hopefully Eflin's Phillies career proves to be much better than either Russ Miller's or Floyd's. 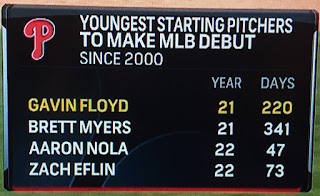