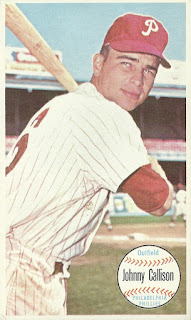 One Sentence Summary:  The Diamondbacks completed the four-game sweep of the Phillies, 3-1, as the team's offensive woes continued.

What It Means:  Each time I think the Phillies have hit rock bottom, they add another loss to their tally.  The team has lost seven in a row and 11 of their last 12 games.  They'll now head to Minnesota to open a three game series against the worst team in baseball.

What Happened:  Jeremy Hellickson gave up three first inning runs and then settled down for the duration of his outing.  He ended up pitching seven strong innings, allowing six hits (only two after the first inning) and striking out six.  The offense had six hits and went 1 for 8 with runners in scoring position.

Featured Card:  As pointed out during this game's radio broadcast, this is the first time the Phillies have had a winless homestand of six games or more since September 1964, when their entire world fell apart around them.

In one of the greatest, most devastating collapses in baseball history, the 1964 Phillies had a 6 1/2 game lead in the National League on September 20th with 12 games to play.  On September 21st, they'd lose the first of 10 games in a row, including seven in a row at home to the Reds and Braves, to drop out of first place.

Bring on the Twins!

Email ThisBlogThis!Share to TwitterShare to FacebookShare to Pinterest
Labels: 1964, Callison