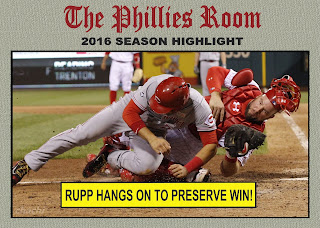 One Sentence Summary:  Aaron Nola pitched another great game, but it was Tyler Goeddel's throw from left and Cameron Rupp's play at the plate that preserved the 4-3 win for the Phillies.

What It Means:  The win means the Phillies have sole possession of the N.L. East, and they're one game behind the Nationals for the top spot in the division.  Don't try to understand this.  Just enjoy it.

What Happened:  With runners on second and third, only one out and trying to preserve a one-run lead, David Hernandez got Jordan Pacheco to fly out to Goeddel.  The rookie left fielder unleashed a perfect throw home, and Rupp somehow held on to the ball as Eugenio Suarez barreled into him. The third out was recorded and the Phils had yet another one-run win.

Nola tied his career high with nine strikeouts.  He allowed two runs (one earned) and five hits over seven innings.  With Hector Neris and Jeanmar Gomez needing the night off, Andrew Bailey and Hernandez filled in.  It wasn't a clean save for Hernandez, but thankfully Goeddel and Rupp bailed him out of trouble.

Featured Card:  Rupp earned the third Chachi Highlight card of the year for his game saving catch and block of home plate.  And yes, I've started calling these Chachi Now cards in honor of the idea hatched by Topps with their Topps Now cards.

Recently added to The Phillies Room - 2016 Season Summary page with game results and links to game summary posts.
Posted by Jim at 10:00 AM

That cheap knockoff "Topps Now" has a similar card today...

Of course I'm biased, but I like mine better.