Howard Homer Wins It in 11! #ChachiNow

One Sentence Summary:  Ryan Howard won the game with an 11th inning walk-off home run against the Indians.

What It Means:  These Phillies are exciting!  Who saw this coming?  The pitching staff's 240 strikeouts currently leads the Majors.

What Happened:  Howard had quite a night, going 3 for 5 with a single, double and his dramatic home run.

Adam Morgan was recalled to take Charlie Morton's place in the rotation, as Morton is now lost for the season with a bad hamstring injury.  Morgan struck out seven in his five innings of work, allowing all three Indians runs.  The bullpen was phenomenal, pitching six scoreless innings and striking out 11.  Andrew Bailey and David Hernandez each pitched a pair of scoreless frames.

Featured Card:  A walk-off home run by the veteran qualifies in my book for a Chachi Highlight card.  (I'm happy to see Howard has received a Topps Now card.) 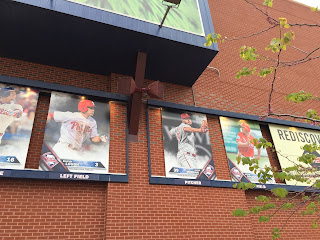 Field Report:  Now in the interest of full disclosure, we were not around for Howard's game winning heroics.  A very cold night, coupled with a very early Saturday morning wake-up call for Doug's soccer tournament, meant we needed to leave relatively early.  We left after the fifth inning with the score tied at three. 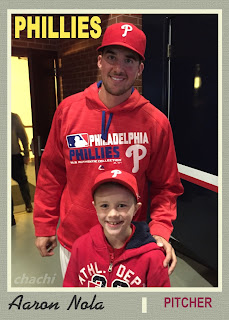 Before the game, we admired the new giant Topps line-up cards for David Lough, Morgan and Peter Bourjos.  Walking through the concourse, we stopped by the radio booth and listened to the end of Jim Jackson's interview of Aaron Nola.  When Nola exited the booth, he was kind enough to pose for a picture with Doug.  Doug and I agreed that we needed to be better prepared next time with a Sharpie and an extra team photo card set for autograph purposes.

Transaction:  Morgan was recalled from Lehigh Valley on Friday afternoon and reliever Luis Garcia was optioned down to the IronPigs.

Recently added to The Phillies Room - 2016 Season Summary page with game results and links to game summary posts.
Posted by Jim at 2:00 PM

The more I learn about Nola, the more I like him. I hope I don't get my "Mets Fan Club" card revoked. :-)

Not a Phils fan but I must commend you on that awesome 70 looking season highlight card. That's beautiful.

TSR - Come with me to the light side of the Force! There's still time! ; )