One Sentence Summary:  The Nationals easily handled the Phillies for the second night in a row, scoring early and oftern in an 8-1 victory.

What It Means:  Manager Pete Mackanin has warned that changes could be coming in order to hopefully inject some life into the struggling Phillies offense.  Right fielder Cedric Hunter went 0 for 4 to lower his average to .091, and Darin Ruf's 0 for 4 (while starting in left field) lowered his average to .083.

What Happened:  For the second night in a row, the Nationals jumped on the Phillies early, scoring three times in the first.  Aaron Nola was lifted after five innings, having allowed seven runs on seven hits.  Max Scherzer easily handled the Phillies line-up, with the only Phillies run coming on a Cameron Rupp blast to left.

Featured Card:  Rupp absolutely crushed his first home run of the season, and this proved to be pretty much the only highlight for Phillies fans in this game.  It's nice to finally see a Topps card for Rupp, even if it's in the retail-only team set.  I would think this card is a preview for the card that should ultimately end up in Topps Series 2. 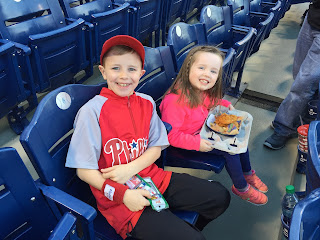 Field Report:  Doug and I took in this game with my niece Molly and my brother-in-law Bill.  Molly was way more into the game than I anticipated, cheering every time the Phillies did anything and every time the Phanatic made an appearance.

An important cotton candy taste test took place in the middle innings with Molly deciding that she didn't care for it, while Doug was happy to pick apart what was left.

Recently added to The Phillies Room - 2016 Season Summary page with game results and links to game summary posts.
Posted by Jim at 5:00 PM