One Sentence Summary:  Charlie Morton and three relievers combined for a four-hit shutout against the Padres.

What It Means:  Since struggling mightily through the first four games with a 12.66 ERA, the Phillies bullpen has not allowed a run over the past four games and 10 2/3 innings.

What Happened:  Morton pitched 6 2/3 innings, striking out seven and rebounding nicely from his first shaky start.  Jeanmar Gomez recorded his third save.

Odubel Herrera got the Phillies on the board in the sixth with an RBI triple to score Tyler Goeddel. Goeddel had reached with his first big league hit.

Featured Card:  I wanted to pay tribute to Goeddel for collecting his first hit and scoring his first run in this game.  Goeddel is in the new team issued set, but his first official Phillies card (at least according to my subjective standards) has been available for a few weeks. 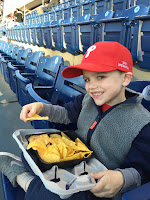 On April 1st, the Phillies played an exhibition game in Reading against the Phillies Futures - a team comprised of the franchise's top prospects.  The Reading Fightin Phils, never a team to miss a great promotion, issued a 25-card set in conjunction with the exhibition game featuring the team's top 25 prospects as currently ranked by MLB.com.  Goeddel is number 18 on that list, so he found himself in the set.  (When I last checked, the set was still for sale at the Reading Fightin Phils' online store.)

Field Report:  I wasn't there, but my wife Jenna and my youngest son Ben enjoyed this game.  Ben highly recommends the nachos and Phanatic Phun Zone.  He's also trying to decide if his favorite player is Maikel Franco or Aaron Nola.
Posted by Jim at 9:00 PM

Email ThisBlogThis!Share to TwitterShare to FacebookShare to Pinterest
Labels: 2016, Goeddel