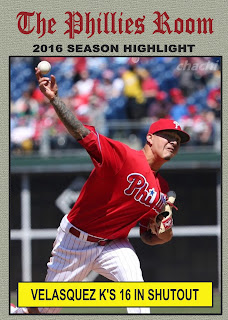 One Sentence Summary:  Vince Velasquez delivered one of the best pitching performances in recent Phillies history, pitching a complete game shutout and striking out 16 Padres.

What It Means:  A few of the Phillies beat writers Tweeted out the following impressive information:
What Happened:  Ryan Howard accounted for two of the Phillies three runs with a solo home run in the second (his 3rd of the year) and a sacrifice fly in the sixth.

Velesquez needed 113 pitches for his gem, and he allowed only three hits.  He retired 22 of the final 23 batters he faced.

Featured Card:  Velasquez's pitching performance earns him the first Chachi Highlight card for the year, which uses a template based on the 1970 Topps World Series cards subset. 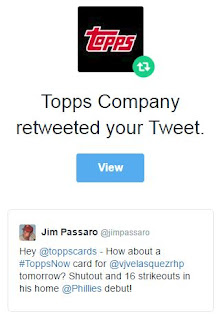 Transaction:  On Thursday morning, it was announced that reliever Daniel Stumpf had received an 80-game suspension for the use of banned PEDs.  He was placed on the restricted list by the Phillies and Elvis Araujo was recalled to take his place on the roster.

This is a huge disappointment.  Stumpf was selected from the Royals in the annual Rule 5 draft, and he'll be eligible to return to the Phillies on July 1st.

Recently added to The Phillies Room - 2016 Season Summary page with game results and links to game summary posts.
Posted by Jim at 7:00 AM

Thanks! The original featured a black and white photo to really pay tribute to the originals, but I liked the color photo better. Maybe the B&W variations will show up as a super short-print in retail only packs.

Hey Topps did a Bunt App highlight card for this. I agree they should have done a Topps now card as well.

The Topps Now card for this game was released on Friday and they stopped selling it yesterday afternoon.