I almost decided to skip this little exercise this year once I figured out that Topps has all but abandoned the practice of matching up cards from their Heritage set to a logical counterpart to the original set being referenced.  I still want to go back and perform this analysis for the early years of Topps Heritage, as it seems that the company at one point actually tried to match up cards. 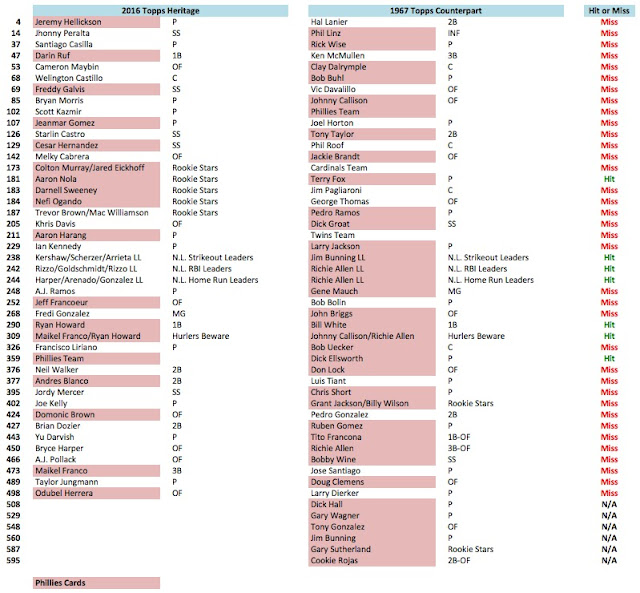 Aaron Nola and Ryan Howard share their card numbers with Terry Fox and Bill White respectively. The league leaders cards match up and Topps did a nice job replicating the Phillies-themed Hurlers Beware combo card.  It's probably just dumb luck that card #359 in both sets belongs to the Phillies. Other than that, there's no real correlation.

To be fair, Series 1 of 1967 did not include the little dot... But I think the card reads much better with the dot, I do wish they'd included it.

Thanks for going through this so I didn't need to. The Dot was kept on the Hurlers beware card. It is an odd omission.

I always liked that '67 Bill White card (with Connie Mack's left field bleachers in the background). My first one was a hand-me-up from my 1-year-younger brother in the summer of 1967 - I think there were more creases on it than flat area! I later replaced it (and all my other early-series, round-cornered '67 Phillies).