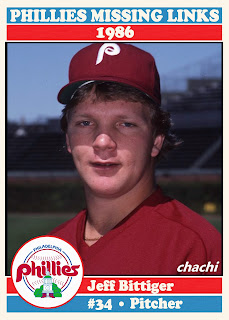 When rosters initially expanded in September 1986, the Phillies recalled outfielder Chris James, infielder Greg Legg and starting pitcher Jeff Bittiger.  Bittiger had come to the Phillies along with catcher Ronn Reynolds in January in a deal with the Mets that sent two prospects to New York.  He had a decent season with Triple-A Portland (13-8, 4.15 ERA) and the Phillies needed starting pitching help during the final month of their season, so he got the call-up.

In three starts, Bittiger would go 1-1 with a 5.52 ERA and the Phils ended up releasing him in December.  His longest stint in the Majors came in 1988 with the White Sox when he appeared in 25 games, earning him a number of mainstream baseball cards in 1989.  Bittiger pitched professionally with the Fargo-Moorhead Red Hawks for seven seasons between 1996 and 2002, finally retiring at the age of 40.

Homered in his first ML at Bat off Bob Kipper I believe.

Impressive that you'd remember that! It looks like it was his second at-bat, and it was in fact off Bob Kipper: