My oldest son Doug recently asked me to help him organize his quickly expanding baseball card collection.  I of course dropped everything and immediately obliged.  When sorting his cards into years, I had no problem identifying Topps cards up through 2010.  I was a little alarmed to discover that I had to check the backs of some of the cards to identify Topps flagship cards from between 2011 and 2014.  (As an aside, I had no issue identifying 2015 Topps cards, which I think is a good thing. And I know I won't have an issue picking out a card from the even more unique 2016 Topps set.)

Some people might love the Topps designs for the 2011, 2012, 2013 and 2014 sets, but I find the designs mostly forgettable.  My thought on the 2014 Topps set when it first came out was that it had way too much going on with the design elements on the front, and overall look reminded me of something I'd see in a recent Bowman set.

With that underwhelming assessment out of the way, let's take a look at the 2014 Topps Phillies cards.  I'll be all caught up with this series (finally) until the 2015 Topps Update set comes out next month.

The Set
Number of cards in the set:  For the ninth year in a row, Series 1 and Series 2 have 330 cards each with #7 omitted in honor of Mickey Mantle.  The Update Series adds another 330 cards.  It's important to note that I'm omitting any gimmick or short-printed cards in these tallies.  A number of star cards are available with a sparkle added to the photo on the front.
My very brief thoughts on the set:  In light of what would come after it, with the unique designs of the 2015 and 2016 Topps sets, this set's design comes off as uninspired and seemingly a mish-mosh of design elements Topps couldn't fit into other sets.  For the third year in a row, the backs of the cards are very plain.

2014 Phillies
Record and finish:  In manager Ryne Sandberg's first (and only) full season, the Phillies went 73-89, finishing in last place in the N.L. East, 23 games behind the Nationals.
Key players:  Chase Utley had a decent year, hitting .270 with 11 home runs and 78 RBIs and he was the team's sole representative at the All-Star game.  Marlon Byrd returned to his original team and led the way with 25 home runs.  Ryan Howard had 95 RBIs, but hit an awful .223 while Jimmy Rollins dipped down below .250 with a .243 average.

The pitching was rough to witness with Kyle Kendrick leading the staff with 10 wins and his 4.61 ERA was just a little worse than team leader A.J. Burnett's 4.59.  Burnett (8-18) was one and done with the Phillies in 2014, opting to take a severe pay cut to return to the Pirates for 2015.  Cole Hamels received very little run support, which explains his 9-9 record despite a 2.46 ERA in 30 starts.  Jonathan Papelbon recorded 39 saves.
Key events:  There were a few big events for the club in 2014 that kept the fans entertained.  First, on June 14th, Rollins collected his 2,235th career hit, eclipsing the franchise mark for most hits previously held by Mike Schmidt.  On Labor Day, Hamels combined with Jake Diekman, Ken Giles and Papelbon to throw a combined no-hitter against the Braves.

Finally, top prospect Maikel Franco made his Major League debut the day after the combined no-hitter on September 2nd.

2014 Phillies in 2014 Topps
Who's in:  The complete Phillies team set consists of 29 cards, broken down with 10 cards in Series 1, 11 cards in Series 2 and eight cards in the Update Series.  There are no short-printed, photo variation cards for any of the Phillies.

Roberto Hernandez, who started 23 games but was traded to the Dodgers in early August, got shut out from having a Phillies card.  It bugs me that Topps couldn't bother with an actual photo of Burnett in a Phillies uniform.  His base card is obviously photoshopped, and it still shows him wearing his gold and black Pirates necklaces.  Similarly annoying, but less egregious, is that Byrd's card features a photo from his first stint with the club from between 2002 and 2005.  Byrd wore #3 with the Phillies in 2014.
#74 John Mayberry Jr., #90 Ethan Martin, #122 Jonathan Papelbon, #345 Darin Ruf, #451 Luis Garcia, #609 Jonathan Pettibone, #629 Cliff Lee, #637 Freddy Galvis, #US-33 Grady Sizemore, #US-74 Antonio Bastardo, #US-77 Wil Nieves, #US-78 Reid Brignac, #US-129 Mike Adams, #US-181 Tony Gwynn Jr.
#498 Steve Susdorf, #565 Roy Halladay
Who's out:  I feel like Topps really picked up its game over the past decade in terms of player selection.  Once again, they did a nice job including a full array of Phillies players this season, from the bench guys to the bullpen.  Of the players not receiving cards, I'd include Cesar Hernandez (66 games), along with relievers Diekman, Justin De Fratus, Mario Hollands and Giles.
Phillies on other teams:  Jerome Williams (#US-236) is in the Update Series with the Rangers.

What's he doing here:  I have no problem at all with the final tribute card for Halladay, showing his full career statistics.  Halladay announced his retirement prior to the 2014 season.  And I think it's great that career minor leaguer Susdorf ended up on a card.  Susdorf made it into three games with the 2013 Phillies after having spent 5 1/2 years in the Phillies minor league system.  He was released by the Triple-A IronPigs in July 2014.
Cards that never were candidates:  Both Hernandez's - Cesar and Roberto, Diekman, De Fratus, Hollands and Giles.  Just to amuse by oldest son Doug, I'd also have a card for reliever Jeff Manship.

Favorite Phillies card:  I really liked the Galvis card when I first saw it, but then it bothered me that you can't even see Galvis's face.  (Besides, I like to think I did this card better.)  I'll go with the Rollins card as my favorite, since it's his last Phillies card as an active player.  Rollins would be traded to the Dodgers in December following the season.

Other Stuff
Variations:  There are no variations to be found between the flagship, retail, Chrome and Opening Day sets.  After years of asking myself, "Well why did they bother to do that?", I find that I'm actually disappointed now when there are no strange, unexplained variations. 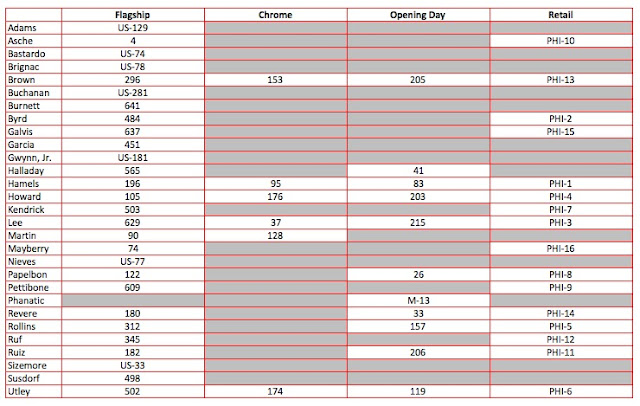