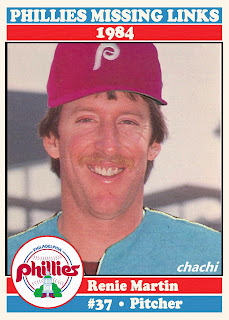 Taking over the #37 recently vacated by Jim Kern, Renie Martin was another recognizable name and face (at least to me) when he joined the 1984 Phillies in late August.  Martin enjoyed his best seasons with the Royals in 1980 and 1981.  He faced the Phillies in the 1980 World Series pitching a total of 9 2/3 innings over three separate relief appearances, allowing three runs.

Martin came to the Phillies from the Giants as the player to be named later in the Al Oliver trade, and he took the roster spot of Don Carman who was optioned to Portland.  He made his Phillies debut against the Giants on August 30th and he'd appear in 8 more games with the club throughout September.  Released by the Phils in November, Martin would go back to the Royals where he'd spend the next two seasons pitching for their Triple-A team in Omaha.

Sources:  Thanks to reader Mike who sent me his Martin in a Phillies uniform creation and inspired me to try my hand at my own creation.  Baseball Reference and The Trading Card Database